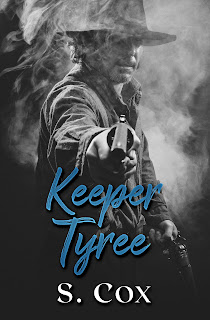 An aging bounty hunter and a woman bent on vengeance form an unlikely alliance.

Keeper Tyree is an aging bounty hunter who lives by his own set of rules. He’s a hard man, but he’s just, and his word is his bond. He’s a loner and likes it that way. Then Cathleen O’Donnell catapults into his life looking to hire his gun. Josiah Pardee has killed her boy, and she’s out for vengeance. Somehow all his hard and fast rules, including working alone and minding his own business, crumbles in the face of the immovable widow he now works for. He finds himself rescuing soiled doves, a myopic bookworm more suited to city life than the Wild West, and a Kickapoo who’s in deep trouble as he tracks down the murdering sidewinder Josiah Pardee.

No tinny piano. No rotgut whiskey. No barroom brawls. Just peace, quiet and the early morning sun, shining through white ruffled curtains, warming the back of Keeper Tyree’s neck and soothing his arthritis. He brought his coffee to his lips and sighed with pleasure. Like his landlady it was strong and full-bodied, just the way he liked.

Molly, the owner of the boarding house he resided in, came by with the coffee pot. She winked at him and, giggling, moved out of reach when he went to pat her fanny, disappearing into the kitchen where the smells of breakfast potatoes, steak and eggs loosened his muscles and had his stomach growling in anticipation.

Heels clicked on the spotless, honey-colored wood floor. A woman so thin, she’d be lost if she turned sideways, approached from the doorway. She’d be striking if slashes of grief didn’t line her mouth and despair turn her eyes to a wintery slate blue. Still, they met his, direct and unswerving. A black ribbon held back hair as dark as a raven’s wing, except for streaks of white at the temples. Cheekbones sharp enough to cut paper held no color.

She stopped in front of him.

“Ma’am.” The chair scraped across the floor as he pushed to his feet.

“Are you Keeper Tyree?”

“Do you know of Josiah Pardee?”

“I do.” He stuck his hands in his pockets and rocked on his heels, his voice rough and raspy from too much whiskey and too many cigars.

“He killed my son over a saloon tart. My boy wasn’t even armed.” The woman looked brittle as dry timber. He fancied if he rested a hand on her arm it would break like kindling. Only her voice and eyes showed emotion. A fire burning almost out of control leaped bright and violent behind her eyes, taking them from wintry blue-gray to heated sapphire.

“You have my sympathy.”

The almond-shaped eyes drilled into him. “I don’t want your sympathy. I want your gun. I want that man as cold and dead as my son.”

at May 29, 2021
Email ThisBlogThis!Share to TwitterShare to FacebookShare to Pinterest
Labels: Romance, Western