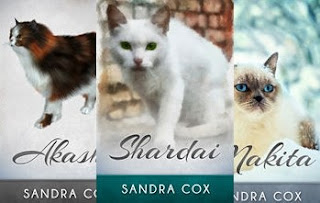 Shardai is a large sleek cat with attitude. He has the courage of a tiger and the disdain of a king. The fearless feline has only one weakness—his human. He will do anything, even come back from the afterlife for her.

Shardai is the first in The Cats of Catarau Series.

Akasha is a pretty little calico who, along with two of her kittens, has drowned and passed on to Catarau. Now she must journey back to earth to save the kitten left behind.

Akasha is the second in  The Cats of Catarau Series.

Makita must use her second life to return to earth and take care of her pal, Bennie the Boxer. But finding Bennie is only the beginning. After they're reunited, Makita and Bennie stumble on a dog fighting ring. Now the fearless feline must use her considerable cunning to breakout the hapless creatures that have been stolen to use as bait for the fighting dogs.

Makita is the third in The Cats of Catarau Series.

The series is available at Amazon in E and paper.

at November 04, 2020
Email ThisBlogThis!Share to TwitterShare to FacebookShare to Pinterest