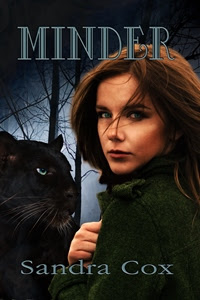 On the eve of her eighteenth birthday, Aurora Valente goes through disturbing changes. She purrs and craves raw meat. Most alarming of all, she’s taken to chasing wildlife. Her aunt gives her a beautiful, antique choker and tells her a story about a shapeshifting Minder princess and the beast that hunts the Minder’s descendants.

To Aurora it’s only a story...till later that night when her world takes a turn into terror. A horrific beast chases her through the woods, where a puma with the eyes of a stranger she saw in town comes to her rescue.

While the beast and puma fight, she feels her bones break and reform. Her scream comes out a snarl. She lands on all fours, shaken to the depths of her soul.

Available at Amazon in E or paper.

at November 02, 2020
Email ThisBlogThis!Share to TwitterShare to FacebookShare to Pinterest