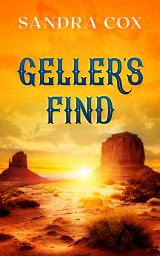 It’s summer break and Dr. Luke Geller, history prof and part-time archeologist, is in Nevada looking for potsherds. What he discovers is an antique rifle and a portal in time.

When Geller touches an ancient piece of chiastolite crystal, the earth rumbles, the skies darken and the ground opens. He’s hurled straight to the core of the earth then shot back up and spewed out.

When he stumbles to his feet, he finds himself where he began. Same yet different. There are no winding roads. No parking lots. No cars. No town with bright lights in the distance. Only Lily Winter Tremaine, an angry young woman pointing a gun at him, demanding he hand over her rifle.

All thoughts of primitive pottery disappear as Luke finds himself fighting alongside three young women trying to hold onto their ranch against a dangerous scoundrel who intends to have the ranch by whatever means possible. Then there’s the little matter of Luke being mightily attracted to the young woman he’s working for. A woman old enough to be his great-great-granny. And Miss Lily Winter Tremaine does not figure into any of tenured professor Luke Geller’s lesson plans.

The air knocked out of him, he balanced on his hands and knees not sure if he was alive or dead. The rifle still in his white-knuckled grip.  He wasn’t even sure if he could open his hand to let it go.

Since every bone in his body wept, he must be alive. His flopping stomach pushed upward and he hurled up a power bar he’d wolfed down earlier.

Cold and clammy, breathing hard, he leaned back against the mountain and looked around.

He was back on the ledge where he’d found the rifle. What the hell had just happened? One minute he was backing up from the ledge, gun in hand, the next blown off his feet, the ground falling away and carrying him down toward the earth’s core, only to reverse course and shoot him back up where he’d started.

It had to be the chiastolite, but he was damned if he had any plans to examine it up close and personal again. Still…

The clouds dissipated like they’d never been and the sun beat down, warming his aching shoulders and drying his clammy skin. For a moment, he closed his eyes and turned his face upward, seeking warmth. Comfort.

He’d traveled a lot in the past ten years, encountering things that bordered on the supernatural, but he’d never encountered anything like this. He needed to talk to a meteorologist. Luckily, he knew a good one. He’d give him a call once he had a moment to write down his thoughts and get them in chronological order, study his surroundings.  Even though he had no intention of touching that ancient stone, he could get some good pictures of it with his phone. Study them. Share them with other archeologists.

He looked around. Where was his backpack he’d dropped?

His lips tugged up. Whatever just happened, he still had the rifle. Well, better get to it. With a groan he pushed to his feet, trying to regain his equilibrium. As a kid, he’d always thrown up on carnie rides and this was the wildest ride he’d ever been on.

He took a couple of steps forward and glanced down. Goose bumps roughened his skin as a chill coursed down his backbone. No cars, including his rental, gleamed against the landscape. Hell, he didn’t even see a road.

A sound to his left, had him whirling, ignoring the ground that still had a tendency to spin.

A gun-hammer clicked. Loud in the quiet.