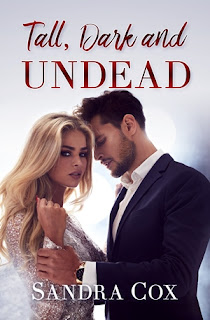 Gutsy, kick-ass Suzanne James has no intention of complicating her life by falling in love…especially with a vampire. But it’s hard to stay objective when a drop-dead gorgeous male rescues her from three assailants in a dark alley. All but unconscious, she could swear her hero has glowing red eyes and two sharp, pointed teeth.

Adrian Caine has spent the past hundred years, in vampire parlance, a vegetarian. When he rescues a beautiful blonde in a dark alley, it takes all of his formidable control not to backslide. Attraction turns to desire. Even though it’s not in Suzanne’s best interest, he can’t stay away. 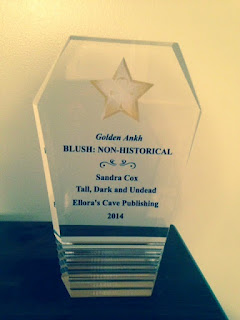 Executive suites are a well-kept secret at hospitals. If you’re the average schmuck, you’ve probably never even heard of a hospital suite. I was an average schmuck myself. My paycheck planted me firmly in the middle-class schmuck category. And if I had to say upper or lower middle class, it certainly wouldn’t have been upper, but I digress.

Kess hurried back with a cup of coffee that sloshed over the sides as he trotted toward me.

“Bless you, Kess.” I snatched it from his outstretched hands and took my first swallow. “Ah, caffeine.” I closed my eyes and had a private moment. Besides indescribable sex, which to be honest I couldn’t say I’d had that much of, the other two things that moved me to ecstasy were coffee and chocolate.

As if he could read my mind, Kess dug in his gray silk suit pocket and pulled out a bag of candy.

“Kess, I could kiss you.” I put down the coffee with my good hand, grabbed the bag and ripped it open with my teeth, held it over my mouth and poured them in.

“I would have done that for you, Suzie.”

Nobody but Kess got away with calling me Suzie. Since my mouth was full, I could only nod.

He took the bag from my hand and handed me the coffee. I swallowed with difficulty then took a slug of hot caffeine.

Once  again  his  skinny  derriere  hovered in  the  air  before  he  plopped  down.  I finished the coffee and held out my hand for more candy-coated chocolate pieces.

“First tell me what happened.”

I stuck out my lower lip and managed to make it tremble.

Kess was tough when it came to meeting quotas and staying on budget but he was a softy for people, especially me.

“Here, here.” He poured the remaining pieces—all five of them—into my outstretched hand. I swallowed the candy and looked at my empty coffee cup then decided not to push my luck. Kess had done enough for me already.

“So what happened?” The leather chair sighed as he leaned forward.

“It was very strange, Kess.” I was just getting ready to explain how strange when Annie, one of the kitchen assistants, rushed in with my tray.

At the interruption, Kess began to mutter in Latin. I grinned. He’d apparently forgotten that he’d taught me how to curse in that particular language after we’d consumed several margaritas at happy hour last month.

Anny plunked down the tray, gave me a sour look and hurried away. Everyone knew I got preferential treatment. I lifted the lid and beamed. “Steak, baked potato, a slice of pizza loaded with everything and a piece of coconut cake.”

“And a carafe of coffee,” Kess added helpfully.

“I don’t suppose you’ll take this sling off my arm?” I asked without much hope.

He looked around furtively. “Just long enough to eat.”

I picked up my fork with my right hand and winced, the shoulder tender. But I’d survive. I started with the cake and worked my way backward. For hospital food it was pretty darn good. When my stomach groaned in protest, I stopped.

“I can’t eat another bite.” A good deep breath and my distended belly would pop. I leaned back against the pillows and closed my eyes

“There isn’t another bite.” Kess shook his head. “Your metabolism is unbelievable. How you stay a size two defies imagination.”

“Whatever. Let’s get your sling back on before Nurse McCarthy comes in. She’ll skin me alive.”

“Trust me. No nurse, or doctor for that matter, is going to skin a hospital administrator, at least not while they’re on the payroll.” I leaned forward as he gently slid the sling over my shoulder and around my arm. I wouldn’t have admitted it for worlds but it did relieve some of the throbbing from the fork work.

Since another cup had come with the tray, Kess helped himself to the carafe, took a sip of coffee and leaned forward in his chair. “Now tell me what happened.”

at November 07, 2020
Email ThisBlogThis!Share to TwitterShare to FacebookShare to Pinterest