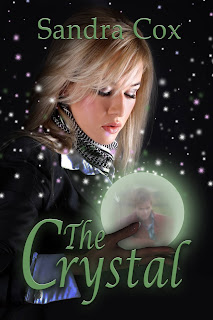 Caught in a downpour, Gabriella Bell enters a trendy little shop and discovers a crystal ball in which she sees the face of a hard-eyed stranger. Drawn by a force she doesn't understand she buys the crystal, unaware she is purchasing stolen property that belongs to the aunt of a premiere cat burglar known to polite society as Christopher Saint and to the underworld as The Tiger.

She soon discovers that not only does the handsome, hard-eyed stranger want the mysterious globe but so does a beautiful ruthless jewel thief who will stop at nothing, including murder, to possess Christopher and the crystal ball . . . and Gabriella is standing in her way. Gabriella discovers the road to true love isn't just rocky, it's downright dangerous.

Available in E or paper at  Amazon

at November 08, 2020
Email ThisBlogThis!Share to TwitterShare to FacebookShare to Pinterest