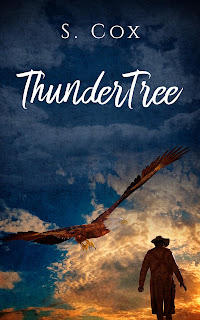 Ben Evers is a drifter that never stays in one place too long, always hankering to see what’s over the next horizon. His traveling companion—an eagle. He lives by two rules. Mind his own business and always treat women with respect. The first rule stands him in good stead until he meets former Texas Ranger John T. McAllen and his niece Kate Landon. The two are drawing him into their lives and Ben knows from personal experience no good ever comes from getting involved in other folks’ trouble.  John T. and his neighbor are caught up in a feud over land and Clary’s daughter. When danger strikes, swift and hard, Ben has a decision to make. Turn his back and ride away from people he’s grown to care about or break his rule of minding his own business, and stay and fight.

Ben Evers watched the scene playing out at the base of the arroyo, ignoring a cutting wind that whipped his shirt against his body and stung his face. He leaned forward for a better view into the clay-colored, rough-edged gully.

Below him, three men tossed a youth back and forth punching him and laughing.

His hands tight on the pommel, he shifted in the saddle.  It went against the grain to let anyone take a licking, especially when the odds were uneven, but he’d learned at an early age to mind his own business. It was a rule he lived by. Still it didn’t sit well. Not well at all.

What the hell? He jerked in the saddle as one of the ruffians tore the youth’s shirt revealing a body that didn’t belong to a boy. At the same time, the victim’s hat fell off and rich russet-colored hair tumbled halfway to a slender waist.

He gave a startled oath. A woman! This changed everything. His other rule: show respect to women. Minding his business be damned.

Available in paper or E at Amazon.

at November 15, 2020
Email ThisBlogThis!Share to TwitterShare to FacebookShare to Pinterest
Labels: Romance, Western